One of the first impressions that Williamsburg County offers to people entering the area is the beauty of live oak trees. The trees, many of which line the streets of Kingstree, are an important part of the local heritage and Southern charm. While Kingstree’s history is most often associated with the white pine that gave the town its name, today the emphasis is turning to the many live oak trees that are part of the town’s beauty and charm.

Explore Williamsburg County and discover one of the most beautiful areas of South Carolina, where history echoes in the fine architecture and new memories are waiting to happen.

Williamsburg County, located in the southern tip of the Pee Dee, holds treasures of historical interest dating back to the early 1700’s. In 1730, Governor Robert Johnson proposed a "Township Plan," marking the beginning of Williamsburg County. This plan was proposed to stimulate the economy of the province to provide protection for coastal settlers. The township, which was laid out on the bank of the Black River, was named Williamsburg in honor of the Protestant King, William of Orange.

Williamsburg Township’s success was largely attributable to the raising and processing of indigo. From indigo, came wealth and prosperity to the area. Hemp, flax, and Holland were other fine quality products introduced in the 1730’s.

In 1780, after the fall of Charles Town, the nucleus of "Marion’s Brigade" was formed in this area. On August 27, 1780, the "Battle of King’s Tree" took place and it was at this time that Major John James turned his group over to Francis Marion, the Swamp Fox. The fighting consisted of rear-action skirmishing, but heavy losses were sustained. British Major James Wemyss, under orders from Lieutenant Colonel Banastre Tarleton, burned the Indiantown Presbyterian Church down.

During the Revolution, Tarleton with one hundred British dragoons, and a large number of Tories under Colonel Elias Ball, encamped at the plantation of Gavin Witherspoon, south of the lower bridge, on Black River, early in August 1780.

As a restoration project, Williamsburg Historical Society relocated Thorntree to the city limits of Kingstree in order to provide police and fire prevention. For future generations, as well as for the present, the Historical Society desires to preserve and restore this early architectural structure. 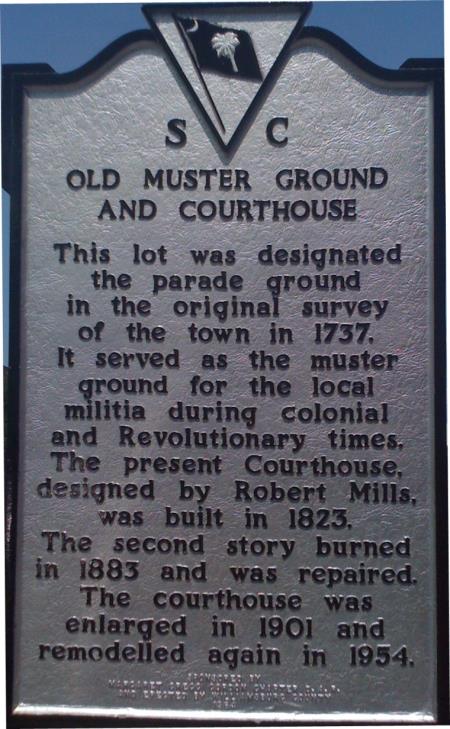 Back in 1737, the Courthouse grounds, located on Main Street in Kingstree, was designated the parade ground in the original survey of the town of Kingstree. The grounds served as the muster ground for the local militia during colonial and Revolutionary Times.

The Black River flows through the Coastal Plain of South Carolina. The headwaters originate in Lee County south of the town of Bishopville and the river flows southeasterly through the heart of Williamsburg County on its 150 mile trek to the Atlantic Ocean. The Native Americans who occupied the area before the colonial era called the river the Wee Nee, and several businesses in the area still use this name.

Black River is a free-flowing black water river shouldered by a ribbon of dense, undisturbed swamp forest. This ribbon of wild and undeveloped land provides high quality habitat for a variety of plant and animal species including some rare, threatened and endangered species such as American chaffseed and the swallow-tailed kite.

The water has a dark inky black color due to chemicals known as tannins leached from the cypress trees and the surrounding swamps. This river has many curves, white sandbars, and seldom flows over 5 miles per hour. It draws fisherman from all over for its bounty of:

It is also an excellent river for leisurely float trips for wildlife watching or nature photography.

In 1999, the Williamsburg Hometown Chamber Quality of Place Committee requested that the South Carolina Department of Natural Resources (DNR) consider the Black River for inclusion in the State Scenic River Program.

In the Spring of 2000, DNR staff initiated an eligibility study of the Black River in Clarendon, Williamsburg and Georgetown Counties. Public meetings held in October 2000 revealed significant local interest for conserving the unique and outstanding resources of the Black River.

The Williamsburg, Clarendon and Georgetown County Councils adopted resolutions of support for the designation.

The residents of Williamsburg County are proud to have South Carolina’s longest State Designated Scenic river running through the heart of their community and are dedicated to its preservation and protection for future generations.

The Kingstree Historic District was listed in the National Register of Historic Places on June 28, 1982. The district contains forty-eight properties situated along Main Street, Academy Street, and Hampton Street in the commercial area of downtown Kingstree, SC including the:

The buildings in the district are a fine collection of nineteenth-century vernacular commercial architecture. Details present on most of the district’s buildings include:

The Williamsburg County Courthouse, built circa 1823, and designed by Robert Mills, is a fine example of Roman neoclassical design with its raised first floor, pediment with lunette, and Doric columns. In 1953/1954 the courthouse underwent substantial remodeling on the exterior and interior, though it still reflects much of Mill’s original design.

In early August of 1780, during the Revolution, Lieutenant Colonel Banastre Tarleton encamped at the plantation south of the lower bridge on Black River with 100 British dragoons and a large number of Tories under Colonel Elias Ball.

The house was moved into Town limits in early 1970’s (for fire protection) and beautifully restored. Owned by Williamsburg Historical Society and used for special occasions, programs and exhibits.

Open by Appointment Only

Thorntree House is open for visitors by appointment only. Please call the Williamsburg Historical Museum at 843-355-3306 to schedule an appointment.